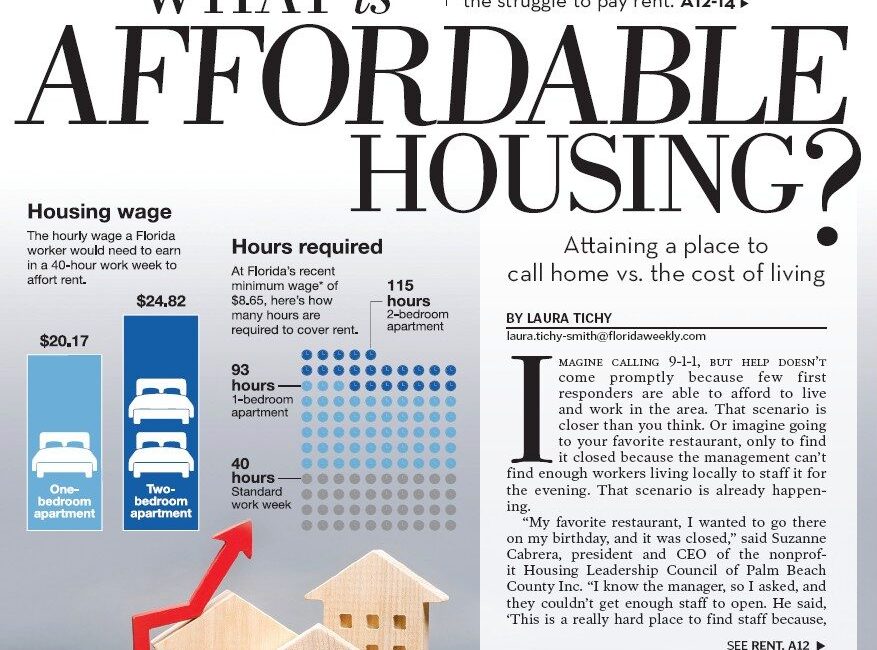 Most people know that affordable housing is a concern for individuals, particularly those in single earner households, or at lower income levels. What isn’t so well known is that there’s a knock-on effect, felt by entire communities, when individuals cannot find affordable housing nearby.

Lois Healy, CEO of AHF, contributed to an article in the Fort Myers Florida Weekly, which explored these problems. The article took a look at how AHF’s initiatives are providing real, workable solutions. It also explores the numbers behind affordability of housing in different areas of Florida, and compares them to other states around the country.

Lack of affordable housing in Florida is a fast growing problem.

More and more people in Florida are finding that their income simply will not stretch to even modest housing, anywhere within reach of their workplace. Those earning minimum wage or close to it are worst affected, of course. Surprisingly, even those further up the income scale are also caught in the crunch. This means people like teachers, police officers and nursing staff are having real difficulty finding a place they can afford to live. That has real costs for the communities where they work, not just for themselves and their families.

The article shows how the cost of housing has continued to rise, while incomes have grown little. There are fewer housing units available at affordable rates across Florida, and more communities are being impacted by the trends.

Affordable housing by the numbers

The more general guideline showing the affordability of housing in a community follows the same idea. The median average price of a housing unit should be no more than 30% of the median income in that area.

Researcher Chris Glynn, in The Annals of Applied Statistics, found the “Expected homeless rate in a community increases sharply once median rental costs exceed 32% of median income.” Many Florida communities are at or past that threshold. The Florida Weekly article explores numbers from around the region, including these highlights:

The community costs of unaffordable housing

When the people who provide services in a community can’t afford to live there, or within commuting distance, they disappear from the workforce there. That has a direct effect on the people who are still able afford to live in that area. Imagine not being able to expect first responders to come to your aid, or finding your favorite restaurant closed unexpectedly. Those scenarios are already playing out, and are expected to become more common.

Another side to the same problem is the challenge faced by employers trying to recruit talent from other areas of the country. They are finding that well qualified candidates are declining job offers because the cost of housing is unattractive compared to other places.

Affordable housing shortage problems getting worse across the region

Several trends are contributing to the problem of unaffordable housing in Florida.

As units have been removed from the rental housing stock, dwindling supply and growing demand allowed landlords to increase rents dramatically.

On top of these problems, many neighborhoods oppose new development of new affordable housing in their vicinity, fearing unwelcome changes.

The article shines a spotlight on AHF projects aimed at increasing affordable housing opportunities. One example is the redevelopment of suburban homes to accommodate several living units, with private rooms and shared living space.

Unfortunately, the region needs thousands of new units at affordable prices, and there is no rapid solution. It takes time to develop housing projects, and often planning and zoning requirements make the process even longer.

The article gives a fairly typical example of local opposition to an affordable housing project, where a developer was planning to build 20 units. Residents attended a planning meeting to protest, but when it became clear that the main objection was concern with increased traffic, the developers showed that the alternate plan, a convenience store, would actually generate more traffic, around the clock.

In many cases, affordable housing is a better alternative to other potential land uses. When the impact of keeping essential workers in a community is considered, it seems like a “no-brainer.”

Read the full article on the Florida Weekly website.

How Can We Help?

Thanks to Our Local Sponsors

Thanks to Our Local Sponsors